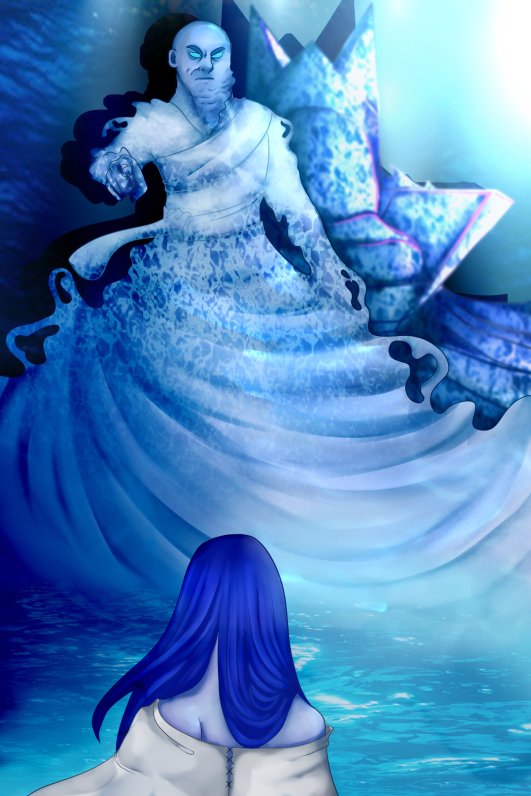 I’ve Been Running A Dungeons & Dragons Campaign For The Last Year… In October 2018, My Player Decided To Start Writing/Retelling Our Tale From The Beginning… Enjoy*

*The Art Above Is Commissioned For This Chapter by Living Silver

Vilven came from the sea. She came from the gentle, dreamlike movement of the water and the carefree dancing of the fish below. Though a simple and lonely life, the hypnotic sway that consumed her was peaceful, and she never expected or wanted any other kind of existence. For this was the life she knew.

Vilven had always lived in the Water Plane as her father was a water elemental. The way of the water elemental was unique, both primitive and aristocratic at the same time, and her father was no exception. In fact, he was regarded as powerful and influential among his kind, as he was archaic, created from the very essence of the sea. He helped rule the Water Plane with other elder elemental, giving order to the inconsistent, fluctuating tide. But Vilven and her father had a difficult relationship. Most of the time Vilven avoided any kind of interaction with him. There seemed to be no respect and no love between them. There were times when Vilven would not see him or his palace for months. Forgoing it for independence and solitude, finding her own food and place to sleep in the ruins or caves scattered around the ocean floor. She knew that this tension stemmed from the mystery of her past and her race, as she was a water genasi. Only half water elemental.

The race of the water genasi was looked upon poorly by the water elemental. They viewed genasi as a mistake, especially elder elemental who believed in a pure way of living, which meant not fornicating with other races. And though Vilven tried throughout her life to find acceptance from her father and other elemental, she soon learned no deed would grant her acceptance. She also learned, however, that the fish and sea creatures enjoyed her company, and she spent most of her time making friends with them. Though most could not carry a conversation, there was a playfulness and joy to them that filled her heart. And as much rejection she received elsewhere, she held on to the approval of the endless sea of the Water Plane, her home.

But everything would soon change for Vilven. Her father sent word for her one evening to come to his palace for an official meeting with the other highly authoritative elemental of the Water Plane. This had never happened before, and without a choice, she made her way to see why he had requested her presence. As she approached the palace, escorted by two of his elemental guard, she took in the tall, spiral  towers of his home, spinning magically like inverted, transfixed, glowing whirlpools. The large, watery gate opened wide as she made her way to the entrance. The guards posted at the doorway gave her disapproving looks as she swam inside the grand meeting hall. She met the gaze of her father then, high upon his throne-like chair, with similar whirlpool turrets, decorated lavishly with seashells and starfish.

When she was in the center of the large room, she stopped swimming to stand on the somehow solid floor, the two guards left her as she took on the vision before her. The whole palace was made from water, as was the elemental in front of her. Staring up at her father, a looming figure in the dying sunlight, she noted his expression was hard. Even though his features seemed loosely defined from the circulating water that made his frame, his almost ghostly appearance was handsome. His head was bald and he had a beard that came down to his chest. He wore long robes, those worn only for a more official matter. Vilven took on a hard look in return. Her tall, slender body normally loose and fluid, tensed. The water pushed the ends of her indigo hair and white fringed dress to caress her silvery-metallic skin as she took a defensive stance. Her large, black, pupil-less eyes narrowed up at him. “Can I help you with something, Father?”

He stood, now almost twice her height and took a few steps toward her, “Vilven…” He turned then, his back to her. “The other elders and I have decided, you are to be banished from the Water Plane.”

Her eyes widened, “What do you mean I’ve been banished? I’ve done nothing.”

He looked over his shoulder at her shocked expression.

“You exist.” He turned to fully face her, then sat king-like in his lavish throne. “It looks poorly upon me to have you here. I’ve kept you safe, but now you are grown and must leave. Now.”

“Do I have no say in this?” Vilven spoke, barley audible in confusion and disbelief. “Where are the other elders? May I speak with them?”

He stood again, and motioned with his arm toward Vilven. “Guards, escort her out. Make sure she leaves the Plane by morning.”

The same two guards marched to her and grabbed her arms on either side.

“Father? Father!” Vilven yelled desperately, as she began to be roughly pulled out of his palace. “Where am I to go?”. Vilven began to cry, her tears mixing with the ocean around her. “This place is all I know.”

The last image she saw before she was pulled out all the way, was her father leaving the room, saying nothing, not even looking back.

When she was outside of the palace gates, she strained her arms free from the grip of the elemental guards. “Let me go!” she declared, “You don’t have to follow me. I’ll leave.” She said to them. One of the guards rammed the end of his trident to her face, taking the air out of her, a small trace of blood forming at her lip. “Don’t tell us what to do, pathetic genasi.”

Defeated, her face grief-stricken,  Vilven swam backwards, slowly floating, slowly falling to the depths of the ocean, pitch black in the night. The two guards watched her descending frame, letting her go.

“She can’t get far down there, it’s too dark.”. One said to the other, as they took an official stance, almost as if it was beneath them to chase after her.

Closing her eyes as she lowered, Vilven tried to slow everything down. Would this be the last time that she would feel this ocean? She tried to hold on to the feeling of it around her, running through her hair, her fingers, her cheeks. She felt the fish below rub against her in excitement, but she was numb to the feeling. Her many necklaces of seashells trailed above her, her tears flowed from her eyes to float for a moment, before dissolving. What was she going to do?  She knew that there was nothing she could say to the elders to convince them to let her stay. She knew she would either have to hide or find a way to leave. And if she did hide, in one of the caves or in the reefs below, they would definitely find her.

As Vilven finally reached the bottom, she settled into the cold sand. She let the sensation run through her, shivering in the chill of the night. She stayed like this, unmoving, for what seemed like hours before her eyes opened slightly, looking up at the impregnable darkness above. It was intensely quiet and the blackness, claustrophobic. Though the depression clung to her, she found some strength to pull herself up on her elbows. She turned her head slowly to the left, but then quickly gasped and pulled back from the image she saw. Two enormous, glowing, blue eyes were swirling above her. She could not tell what they belonged to in the darkness, but she could tell they were powerful.

“Vilven,” a deep, but almost gentle voice spoke. “I have a plan for you…”

Chapter VI – A Charge And A Flame

Chapter VII – Followed By A Lion

Chapter IX – A Dialogue Of Friends